‘I know the island well: I am not afraid of an army if it tries to find me at night.’ 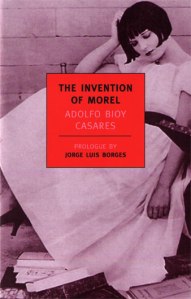 Island fiction, that specialised genre, exploits the novel’s innate artificiality. The relationship between setting and structure become so pronounced as to be almost indivisible. According to Raymond Chandler, any writer short of ideas about what to do with a story, should ‘have a man come through a door with a gun in his hand.’ It need not be a man, a gun or a door, but the effect would be the same: each new arrival offers the potential to divert the path of a narrative. This aspect is heightened by an island, where any visitor- even a footprint in the sand- is a significant event. Who is that approaching on the horizon? It’s the story… 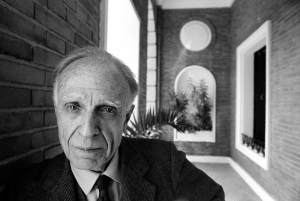 Written in 1940 by the Argentinian Adolfo Bioy Casares, The Invention of Morel crystallises the artificiality of the island genre. Born in 1914, Casares collaborated on a series of detective novels with Jorge Luis Borges who, in his prologue to the novel, described Morel as ‘perfect’ and made the following observation about this exercise in plot:

‘Detective stories… tell of mysterious events that are later explained and justified by reasonable facts… The odyssey of marvels [that Casares] unfolds seems to have no possible explanation other than hallucination or symbolism, and he uses a single fantastic but not supernatural postulate to decipher it.’

Influenced by The Island of Doctor Moreau, Robinson Crusoe and Casares’s fascination with Louise Brookes, the novel follows the story of a fugitive who washes ashore on a desert island and his 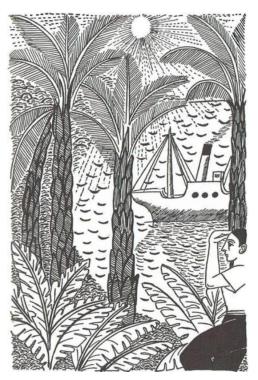 encounters with a group of mysterious tourists. At first, the narrator hides from them. Gradually, he becomes fascinated by one of the party, a woman who ‘sits on the rocks to watch the sunset every afternoon. She wears a bright scarf over her dark curls; she sits with her hands clasped on one knee; her skin is burnished by prenatal suns.’ He returns to the rocks every day, spying on the woman in a state of growing obsession. As he navigates the island and houses, he eavesdrops on the conversations amongst those present, including the inventor Morel. A sense of unreality begins to dominate; the narrative plays with its own artificiality. ‘So I was dead! The thought delighted me. I felt proud, I felt as though I were a character in a novel…’ Two suns hover over the island. The narrator announces himself to the party, only to be snubbed. What is happening encroaches on him steadily. He begins to doubt his own mental state, even guessing himself to be in a mental hospital only dreaming that he is on an island.

To describe Morel as science fiction probably gives the game away. Even for 1940, the book’s treatment of technology feels remarkable. Whereas Brave New World presents a technological civilization as horrific to its savage protagonist, in Morel, technology is portrayed as an inevitable extension of what it has always meant to be human. ”I feel the deepest respect for the men who first learned to kindle fires; how much more advanced they were than we!’

From the bone that crushed a tapir’s skull to the iPhone, humans have always surrounded themselves with technology, although such examples are only ever been tools, distinct objects. Morel examines what happens when that technology infiltrates our sense of reality. The book would be adapted into film in 1974, and has influenced Alain Resnais’s Last Year at Marienbad, and— along with Flann O’Brien’s The Third Policeman— also the TV series, Lost. It’s inevitable that a work which foregrounds the persistence of images in our consciousness, moved from print into cinema, to flicker like the mechanised dreams it depicts.

‘I do not believe that a dream should necessarily be taken for reality, or reality for madness.’

I'm a writer and poet. My first novel, All the Dogs, appeared in 2008, and was described by Niall Griffiths as 'a stirring debut, a compellingly written tract on the importance of finding a place on the earth.' My fiction has appeared in London Noir, Crimewave, Black Static and 3AM. I live in London, where, amongst other things, I teach Creative Writing for the Open University. https://absenceclub.com View all posts by Daniel Bennett

6 thoughts on “The Invention of Morel by Adolfo Bioy Casares”

This site uses Akismet to reduce spam. Learn how your comment data is processed.